THE AWARDING OF HONORARY DEGRESS

Currently, honorary degree recipients are determined through a nomination process organized by the University's Honorary Degree Committee. Nominations may be received from anyone as long as the guidelines and criteria outlined by the committee are followed. In brief, these are some of the considerations of eligibility:

The Honorary Degree Committee (a joint Board-Senate committee) is comprised of: the President, three Senate appointees, one alumni representative, three members of the Board of Governors (including an alumni representative), University Secretary (non-voting) and campus orators (non-voting observers). A quorum is the President and at least four (4) voting members. The committee votes on the nominations, which are presented to the Board of Governors, who decide the final nominees based on the committee's recommendations.

Until the 1970s, there was no organized committee, or such specific guidelines and criteria. Recipients were usually nominated by the chancellor or president of the university.

TYPES OF ADDRESSES GIVEN DURING GRADUATION CEREMONY

Graduation/Encaenia* Address: usually given by a distinguished guest of UNB who is receiving an honorary degree. The addresses range in topic, and have focused on current events, university history, New Brunswick and/or Canadian history, or the recipient's own career.

*Encaenia: “Derived from the Greek and meaning Feast of Reconsecration, has the same sense as “Commencement”, ie. the ceremony celebrating the end of one academic year and the beginning of the next.” - Honoris Causa, p. 8fn.

Alumni Address: usually given by an alumnus of UNB to the graduating class at Encaenia. After 1946 the address has been given during encaenia week, sometimes during the Alumni banquet, or at an alumni meeting or event. Before 1910 there was no real distinction between the alumni and encaenia addresses. After 1973, alumni addresses seem to have disappeared from encaenia-related events, or are not as diligently reported.

Valedictory address: various methodologies have been employed over the years to select a class valedictorian. Currently a student is elected by the graduating class for each ceremony.

The University rents black long-sleeved gowns for bachelor's and master's graduates and solid red gowns for Ph.D. recipients. The official gown descriptions, as set out in the University Calendar are:

The proper way for graduands to wear their hoods is with the color turned out on the left shoulder.

The proper way to wear caps: tassel on left side before graduation and tassel on right side after graduation. Graduates may keep the souvenir caps they receive with their gown rental and they have the option of not wearing a cap.

Members of the military and the RCMP may wear academic dress over their dress uniform. 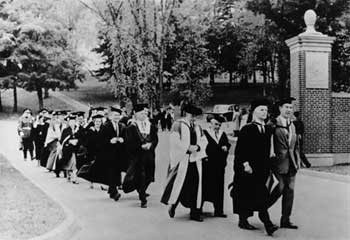 Currently, graduates and faculty members line up in the Mackay Promenade approximately 30 minutes before the start of the ceremony. Members of the platform party line-up at the Aitken University Centre. The procession is traditionally led by a piper who is followed by the University Marshall; Ph.D., Master's, and Bachelor's graduands; Faculty; the Platform Party; and the Mace Bearer. If present, the Lieutenant-Governor and his aide-de-camp are at the end of the procession and are the last of the Platform Party to be seated.

The mace, which symbolizes the authority of the University to award degrees, was officially used for the first time at UNB's 167th Convocation in May 1996.

A gift of the University's Chancellor, Fredrik S. Eaton, O.C., the mace was proposed by President Emeritus Colin B. Mackay, O.C., Q.C. It measures 4.5 feet in length and features an antique silver cup atop a butternut shaft. 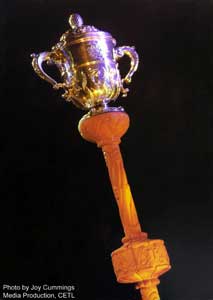 The George II, two-handled cup was given to the University in 1995 by S. A. H. Bridge, the great-great-grandson of Sir Howard Douglas, Bar't. It was once part of a collection of fine silverware presented to Sir Howard by the people of New Brunswick when he returned to England, after serving as Lieutenant-Governor (1823-1831). During his term, Sir Howard took great interest in the institution then known as the College of New Brunswick. He persuaded the British government to grant it a Royal charter, as King's College, and to provide half the funding for the construction of what is now the oldest university building still in use in Canada.

The cup, hallmarked LONDON 1734, is predated by its cover which bears a 1728 hallmark. The armorial engraving on the upper half of the cup and the crest and motto on the cover are those of Douglas of Kirkness, County Kinross.

UNB's Chancellor commissioned New Brunswick artisan Michiel Oudemans to design and create the staff for the mace. Crafted from butternut, a wood indigenous to the province, the staff features elements of the UNB coat of arms and symbols of New Brunswick: a book of learning, beavers (in honour of Lord Beaverbrook, the University's first modern-day Chancellor), a galley, fiddleheads, and Atlantic salmon.

In the Academic Procession that precedes UNB's graduation ceremonies, the mace is carried by the University Secretary.

At the beginning of each graduation ceremony, before the mace is set on its ceremonial stand by the University Secretary, the President petitions the Chancellor to begin the ceremony:

The graduation ceremonies were held in various downtown venues and as the University expanded on-campus venues were used: in 1924 the ceremony took place in Memorial Hall; in subsequent years graduates convened at the Lady Beaverbrook Rink and the Lady Beaverbrook Gymnasium.