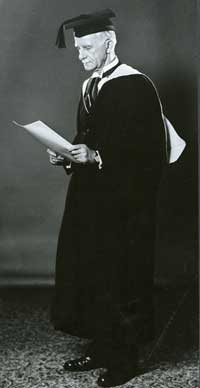 The most distinguished, memorable, and first official orator at the University of New Brunswick was born in 1902 in Cardiff, Wales. Cattley attended St. Catharine's College at Cambridge and was involved in many student activities there such as boating, writing and producing college operettas, and establishing and printing a college magazine. He was also a member of an arts society and was an OTC Platoon Sergeant. After college Robert Cattley came to Canada, and took up the position as head of the Classics Department at UNB in 1929, following William Tyng Raymond in that post. At UNB, Cattley once again involved himself in various campus activities as Commander in Reserve at UNB (having founded Squadron 262 of the Reserve forces), director of drama productions, and as a Scout leader. He was a friend to the Art Gallery in Fredericton, a supporter of the New Brunswick symphony, and enjoyed sailing and skiing.

In 1938, Professor Cattley left UNB when the University passed a new regulation diminishing the role of Classics in under-graduate education. He took up a post at Dalhousie University in Halifax. Joining the RCAF in 1941, he left Dalhousie for four years. After the war, Cattley spent another year in Halifax before returning to UNB in 1947. In 1956-57, he took a sabbatical after being awarded a fellowship by the Canadian Humanities Association. He spent that year at the Institute of Classical Studies at the University of London. From 1962-1964, Cattley served as vice-president of the Classical Association of Canada. Upon his retirement from UNB in 1968, the university awarded him an Honorary Doctorate of Laws, and in 1972 he was made Professor Emeritus. Dr. Cattley retired to Vancouver, and died there on 3 May 1991.

During his tenure at the University of New Brunswick as head of the Classics Department, it was Professor Cattley's job to act as Latin Orator (later university orator). The orator prepared citations about the honorary degree recipients to be read at UNB's encaenia, and later at Convocation ceremonies which began in the early 1950s. Originally the citations were written and read in Latin, but from 1949 onward, citations were written and read in English. In his orations, Professor Cattley did not want merely to list the recipient's professional accomplishments; instead he wanted to humanize them to the audience, and applied one of his own teaching commandments to the orations: “never be dull”. Cattley's citations were witty, well researched, informative, and memorable.

Over 200 of his citations were collected in Honoris causa: The effervescences of a university orator and published by the Associated Alumnae as a tribute to Dr. Cattley upon his retirement in1968.

Read the Foreword by A.W. Trueman and the Introduction by R.E.D. Cattley, Honoris causa: The Effervescences of a University Orator.

Milham, Mary Ella. Greek an' Latin an' A': An abbreviated history of collegiate Classics at Fredericton, 1785-1985 Fredericton: University of New Brunswick, 1990.