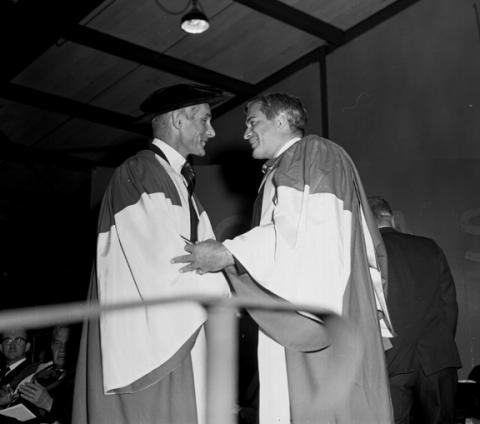 John Napier Turner, though not yet forty, has already attained distinction in Canadian government and politics.

At a Convocation so closely associated with law, it is particularly appropriate that this University should confer its degree of Doctor of Laws on the Minister of Justice and Attorney General of Canada.

Before his appointment as the senior law officer of the Crown in Canada, John Turner had served as the Minister of Consumer and Corporate Affairs, as Solicitor General, and as Registrar General of Canada.

He was first elected to the House of Commons in 1962. Within a year he was appointed a Parliamentary Secretary and two years later entered the cabinet.

John Turner, a very good student and athlete, was graduated by the University of British Columbia with a B.A. degree -- appropriately -- in political science. As a Rhodes Scholar he was awarded three Oxford degrees. Not too long ago, he called upon his political training and athletic prowess to run a most exciting race with national television coverage.

Our Minister of Justice is a member both of the English and of the Quebec Bars.

John Turner has contributed significantly to Canadian public affairs. And for him, the future is one of continuing promise.